It's All In the Name

Have you ever wondered what a baby dedication looks like in Africa? Traditionally, they are called "coming out" for in this culture the mother and baby stay in the house for one week. At one week they leave the house to a party and naming ceremony. Traditionally these parties would include a ceremony to the ancestors and a sacrifice of some sort.
The Christians here in Catel have kept the tradition of staying in the home and coming out after a week. There is still a party and they name the child, but instead of a ceremony to idols it is now a baby dedication.
The church here has started naming their children with Biblical names. This party which has friends and family, is now a witnessing tool. We share why we do this dedication, the baby's name and significance of the name as well as read scripture. It allows our church families to witness to their family and friends, read scriptures to Muslim family members, pray, and sing. All the while respecting and holding on to the parts of the culture that are important and unique to their tribal culture. 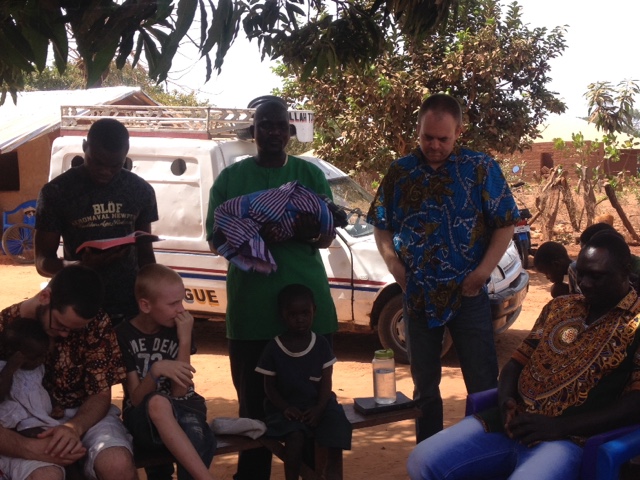 In this picture Michael stands with Djibi (in the middle) and Adramane (on the left) while they are praying over the baby and reading scripture about his name, Jonathon. I have had the privilege of naming several babies that have been born into our church family since living here. Each name has been a biblical person and it has provided an opportunity of teaching the significance of that person in the Bible. Sometimes the name has been tied directly to what is going on in our village. For example, during a recent time of trials in the village (written about in the blog titled "Power of Prayer) a baby from our church family was born in the midst. We gave him the name Jeremiah in hopes that he would be a light with a message to share with the people of this village. 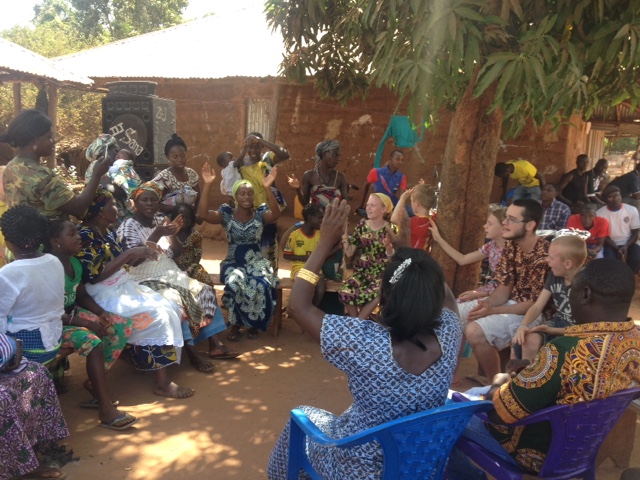 At the end of the baby dedication the women sing some worship songs. This is also another way to reach others as the songs speak biblical truths. 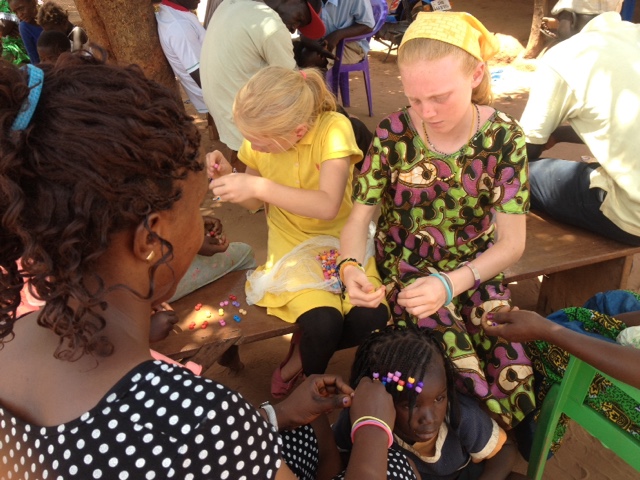 The rest of the day is spent sitting around waiting for the rice dish to be cooked and served. There is usually someone getting their hair braided, music with dancing, hot tea and milk being cooked by the men and passed around, and women in the back of the house cooking all while children are running all over the place playing. We are usually all exhausted by the time lunch is served around 5:00 p.m. and head home shortly afterward, usually being the first to leave, but never empty handed, guests are typically given a can of pop to go home with.
That is how we spent our day today. So as I write this we have just put our children to bed at 8:15 and now Karen and I are collapsing into bed exhausted.
Please continue to pray for these church families as they have adapted the coming out party. Pray it can be a witnessing tool to bring others into the light.
Mike
Posted by Michael and Karen at 3:57 PM 1 comment:

It is hard to believe that we have to say goodbye again. This goodbye is a goodbye that is much different. In America we can say goodbye but know there are ways to stay connected, a phone call, a snail mail letter, Facebook, Twitter, Instagram and a slew of other means of communication. Saying goodbye here though is saying goodbye. We could make a phone call, but it is very expensive, we could come back to visit, but not all of us, that would cost a lot of money. When we were talking with a friend recently she said saying goodbye will be like we died because she may never see us again.
We know we are walking in the Lord's will, but it still hurts. When we leave, we will be leaving a part of our hearts here, all seven of us.
We appreciate any and all prayers you have for our family. Please lift up our children as well. Pray they will be able to adjust and process all of what they have experienced. Specifically, our youngest knows Guinea Bissau culture more as his own rather than American. Pray he will be able to adjust smoothly. Ultimately, we pray we all draw closer to the Lord during this transition. We also pray for the church we are leaving here. We pray they will grow in the Lord and many will see and come to know the power of the Lord.
Posted by Michael and Karen at 6:19 PM No comments:

Home Away From Home

Living in a rural village is tiring, to say the least.  It is difficult to get good food, life is difficult and sometimes we just need a break.  We have been coming to Ziguinchor once a month since we first came to Guinea Bissau.  Ziguinchor is in Senegal, which is north of Guinea Bissau.  When we come into Ziguinchor we can buy western type foods, enjoy internet, running water, cold drinks and relaxation.  We have always stayed at hotel Le Perroquet which is a middle of the road type hotel, owned by a French man. It didn’t have luxuries like hot water or air conditioning, but it had one room that was big enough to fit our family and was affordable.  We have seen many changes done to this hotel including an owner change.  Now it is owned by a French woman named Dominique and she has been improving the hotel by leaps and bounds.  Right before the ownership changed, we were about to be done staying there.  We were suspicious of bed bugs and it was just miserably hot in the rooms and filled with mosquitos, none of us slept well, therefore making us more exhausted returning to the village than when we left.  The first big change we saw to the hotel was, in our opinion, the greatest.  They had installed an air conditioner in one room, and guess whose room that was…ours! They chose to fix up the biggest room first, we’d like to think it’s because it is known as our room, but I’m sure it is to attract bigger tourist groups.  We were beyond thrilled though to be able to sleep in peace, and they installed glass on the windows therefore cutting down the millions of mosquitos that invaded the rooms at night.  Dominique has continued to fix up this hotel and now it is quite nice and very clean.  She has even added a beach area on the river, when previously there was only restaurant seating. The hotel is not only affordable, but a peaceful place to get rejuvenated.

The employees at Le Perroquet are incredibly friendly and very good at their jobs.  There is a language barrier between us, as we don’t speak French, but over the years, we have grown to be friends with the staff.  We know them by name and are always welcomed with a friendly welcome. Dominique also likes to spoil our children with ice cream, chocolate, candy or whatever she may have.  She always makes a point to talk with them (she speaks some English) and on this trip she brought out a couple games for them to play.  One of which is called Game of Seven Families, and it was of course in French.  We enjoyed playing it though and found it a fun way to learn some new French words.

When Lydia got sick and needed to go to the hospital in Ziguinchor, the hotel staff went above and beyond for our family.  They made sure ‘our’ room was open for us, asked about Lydia every day and when Lydia finally was released from the hospital, she was welcomed with hugs from the staff.  They made sure we had everything we would need.  The day she was being released, we had no idea of a time frame, but they let us stay in the room until she safely arrived at the hotel. We were getting ready to go to Gambia for recovery when we realized we had no water for Lydia to take her medicine.  They quickly took note and brought over a water bottle for her, no charge.  Le Perroquet has always gone above and beyond for us, and I believe they do that for all their guests.

Without Le Perroquet, I’m not sure what we would’ve done.  Our children think of the hotel as their second home and we all look forward to our monthly weekend in Ziguinchor.  We realize this sounds like a review for the hotel, but truly this is just us sharing one more aspect of our life here in West Africa. Living in a rural village where we draw our water from a well, have no refrigerator and hardly any privacy, Le Perroquet provided just the right amount of comfort for us.

Posted by Michael and Karen at 2:46 AM No comments: